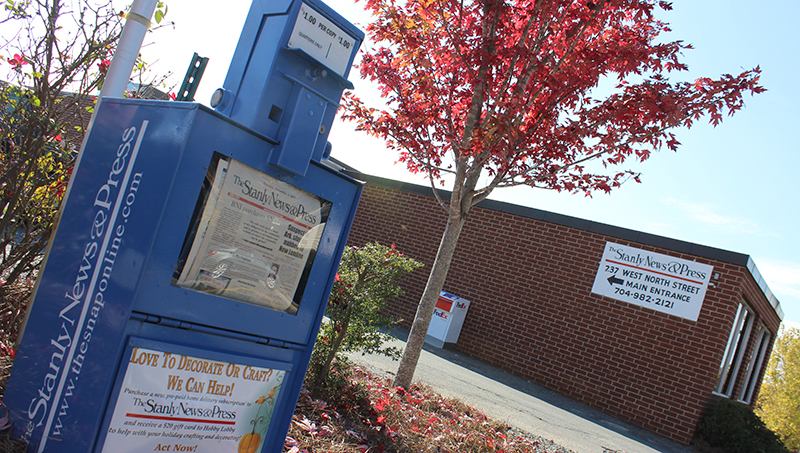 The purchase was finalized Wednesday.

BNI and CNL have offices in Natchez, Mississippi, and Tuscaloosa, Alabama. Todd Carpenter, of Natchez, is BNI’s president and chief executive officer. James B. Boone, Jr., of Tuscaloosa, is BNI’s chairman.

“We are pleased and honored to assume ownership of and responsibility for the Stanly News and Press and look forward to working with each staff member and the community. We will work hard to meet every obligation to the community and to produce a newspaper and website the community can be proud of,” Carpenter said.

Sandy Selvy-Mullis will remain as publisher. “This is an exciting time for The Stanly News & Press.  I look forward to a great future with a company known for quality newspapers and a focus on community news,” Selvy-Mullis said. Sandy began her career in newspapers with the Ottumwa Courier in Ottumwa, Iowa, in 1996 as an advertising sales representative.  She was promoted to special projects coordinator and then advertising manager in Ottumwa.  In 2005, she was named publisher of the Marion County Iowa newspaper group, which included two weekly newspapers and a weekly shopper.  In 2007, she moved to North Carolina as publisher of the Stanly News & Press. Sandy celebrated 20 years in the newspaper industry in December 2016 and 10 years with the Stanly News & Press in April 2017.

BNI and CNL also own and BNI manages 80 newspapers in similar-sized communities around the country.

Other North Carolina affiliates of BNI and CNL are in Salisbury, Tryon, Washington, Ahoskie, Gatesville, Mocksville and Clemmons.

The organization has a rich history of quality newspapers, websites, magazines and other publications in the communities it serves, explained in part by Boone’s corporate philosophy: “We seek to produce the highest quality product the economics of the community can support. And then, by ingenuity and imagination, we strive for a higher quality in an effort to serve and build that community.”