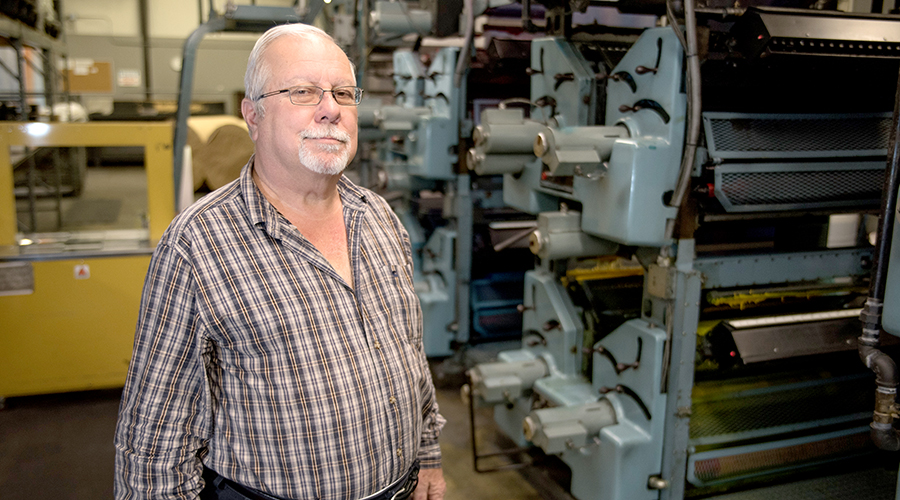 Ruff is only the second production employee to receive the award since its creation in 2003.

The award is given to someone in the Alabama newspaper industry who has demonstrated “outstanding service and accomplishments” during a career of 25 years or more.

Michele Gerlach, publisher of the Andalusia Star-News, nominated Ruff for the award.

“We have depended on him to do regular inspections of our press, to troubleshoot when we have problems, and to help us get it fixed when we were down. I have great respect for Jimmy, not only for his knowledge and expertise in the pressroom, but because he understands and appreciates what needs to happen in the newsroom and out in the community to make us the best we can be,” Gerlach said.

Ruff said he was shocked to be selected for the award.

“I had never heard of anyone in production winning an award from the press association,” Ruff said. “I don’t know what all I have done to be deserving of it. I’ve done my job, but I love my job.”

Advertiser and Shelby County Reporter publisher Tim Prince said “it means a great deal to me and many others who appreciate what Jimmy has accomplished in his career” to see Ruff receive this recognition. 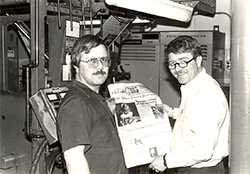 Jimmy Ruff, left, stands in The Selma-News Journal pressroom with publisher Shelton Prince in this photo form the late 1970s.

“I first met Jimmy in the pressroom of The Selma Times-Journal when I was 6-years-old. Jimmy and my father worked together at the newspaper. As a little boy, I would watch Jimmy make this noisy, whirling machine called a printing press spin gigantic rolls of paper on one end spit out newspapers on the other.  I remember gazing with amazement at what Jimmy was doing and getting done – I still do,” Prince said.

Ruff’s production career began in October 1977. He had worked in construction, but began looking for more steady work to support his family as construction slowed in the area. He was living in Selma at the time. He applied to a pressroom position at The Selma Times-Journal.

“I got turned down because I didn’t have experience, so I went back every other day and bugged them, ” Ruff said.

“I would go there on my off days, go down there and learn, get them to show me stuff, so I could learn. I wasn’t making anything. I needed to learn it fast, so I could start making some money to support my family,” Ruff said.

On his days off, Ruff traveled with the person who fixed Boone Newspapers’ printing presses to learn the mechanics of the machines. Now, Ruff fills this role.

“I just like the printing industry. I am fascinated with the printing press, how it operates,” Ruff said. “I enjoy working on the machines.”

At each location, Ruff teaches them more about the press and learns new things from them.

“I’ve been doing this for 40 years and I still learn. I never stop learning,” Ruff said.

Ruff came to Clanton to assist in building the printing plant at the Advertiser.

“I liked it here and I asked for the position to run the plant,” Ruff said.

He started work at the Advertiser in January 2002.

The plant serves as the printing facility for a number of Boone Newspaper operations.

Ruff schedules and oversees the production, and he checks the quality of the printing. These newspapers have won numerous Alabama Press Association Best Presswork awards.

Prince said Ruff has solved “mechanical troubles that would have paralyzed many newspapers.”