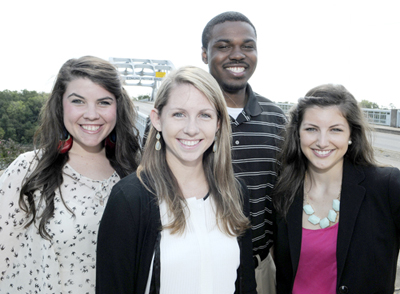 “This job gives us hands-on experience in every arena of producing the news. I have no doubt the experience we get here will equip us to go on and excel in any aspect of the news making business.”

That quote came from Katie Wood, one of four staff writers at The Selma Times-Journal, who are all working in their first jobs in the newspaper business after college.

Wood, a gradate from the University of Alabama, who joined the staff most recently, is part of a newsroom made up of Troy graduate Robert Hudson, Auburn graduate Sarah Cook and Alabama graduate Ashley Johnson.

The most senior member in the newsroom — aside from editor Tim Reeves — is Hudson, who graduated from Troy in May 2011.

The Times-Journal is not the rare exception in having a newsroom made up mostly of recent college graduates. In newspapers — whether they are community dailies or weeklies — finding talented graduates, helping them start their career and molding them into experienced journalists is something you’ll find throughout Boone Newspapers.

For these journalists, they felt they were prepared for what they would be asked to do, but actually doing the job has taught them some lessons their professors in college couldn’t.

“Although I feel like Auburn prepared me well for the ‘real world,’ there are some things you just can’t master by taking a test,” Cook said. “The toughest thing I’ve encountered thus far is the time-crunch I’m put under each day. Having a daily deadline has definitely taught me how to prioritize and manage my time well.”

For Johnson, the daily newspaper pace has been a thrill.

“I remember summer jobs as a teenager that I really enjoyed, but I would sit and just watch the hours, minutes — and even seconds — sometimes tick by. I am lucky on the job as a journalist if I even have a second to check the clock,” Johnson said. “I guess as a journalism student I predicted the job would be exciting and fun, but I was caught off guard by how many things I have to focus on all at once. I absolutely love it.”

As members of the newsroom, each faces daily story minimums and is also asked to paginate parts of each newspaper.

“As a staff writer at the Times-Journal, a typical day involves producing two to three stories from start to finish, taking photos for your stories, laying out the pages, editing stories and collaborating with the other staff members to produce a quality product,” Wood said. “I’ve had a lot of experience interviewing people and writing stories, but I’ve never had to produce two or more stories in one day, on top of everything else. Learning to manage my time and get everything done in a day has been one of the many lessons I’ve learned on the job. That, and how to leave a compelling voicemail so my sources will call me back in a timely manner.”

Figuring out an organizational system that works for you, Hudson said, is crucial to early success.

“Certainly, one of the big things I’ve learned is the need to be more organized and get things done on deadline. With the school newspaper, usually, we had maybe two, three stories a week, but transitioning into this job, you usually see that many stories in one day,” Hudson said. “Organization is key because if you don’t keep a calendar of events and things, you’re bound to miss something.”

Johnson joined the Times-Journal staff in May 2012, followed by Cook’s arrival in mid-August. Wood joined the staff on Aug. 30.

“This newsroom — while yes, inexperienced — is an extremely talented group of young journalists,” editor Tim Reeves said. “They are eager to learn, excited about every story and have made tremendous strides in such a short time.”

Reeves said any hiccups that might be brought about by a young newsroom are made up by their enthusiasm to get better every day. He also said recruiting recent graduates is part of Boone Newspapers’ philosophy of hiring talented individuals, providing them the opportunity to grow and then giving them chances to advance in their career, whether that is within Boone Newspapers or another company.

“We aren’t looking for journalists who are going to start and end their careers in Selma,” Reeves said. “We want our folks to learn, to grow and to move up in their careers. That’s the fun part of what we do.”

As for being part of a community newspaper, each of the staff writers said they have grown attached to Selma.

“The most rewarding aspect of my first ‘real world job’ is definitely the satisfaction I receive at the end of each day knowing that I’ve contributed in some small way to Selma,” Cook said. “Giving a voice to a community and being the ‘eyes and ears’ is something I take great pride in.”

Johnson added she appreciates the mission a community newspaper takes on.

“I think lots of small papers sit on their hands, waiting for something to happen but at the Times-Journal we cover everything, which keeps us busy every minute. There are never enough 100-year-old birthday parties or hamsters that escaped in the local library,” Johnson said. “I have learned that being a community journalist does not just require you as the journalist to cover the events that happen, you have to cover the culture and the spirit of the people in town. Learning this in Selma will surely take me very far.

“Here at the Times-Journal, we are members of the community, working for a better community by encouraging institutions and bringing positivity. We are not just watchdogs, we are good neighbors.”