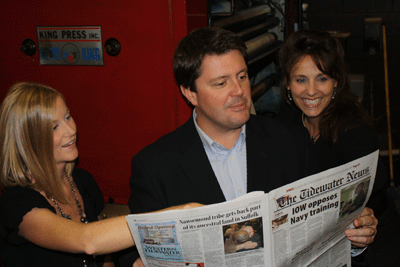 A welcome change of plans

Tony Clark’s heart for community service nearly led him to the political arena.

“Frustrated by the direction I saw our community headed in many respects, and seeing the need for fresh thinking, I thought that holding an elected position would be the best, most direct way to have a positive impact on my community,” Clark said.

But then he got a call from Steve Stewart, publisher of The Tidewater News in Franklin, Va., suggesting a different course.

“Steve called and asked if I would be interested in joining his staff at The Tidewater News,” Clark said. “While I was truly flattered, I was also surprised. It was a nice offer, filled with opportunity to grow professionally and expand my personal experiences in different directions.

But what sealed the deal was when he told me — quite wisely, I believe — that I could conceivably serve my community in better fashion by working at the newspaper than by working in government.”

Soon after, Clark joined The Tidewater News as a marketing consultant and director of special projects. He is responsible for an advertising sales territory but also gets to write a regular commentary column for the newspaper’s Opinion page.

Before embarking on his newspaper career, Clark was an employee benefits consultant for Manry Rawls Corp. and a regional vice president for AXA Advisors. He holds a bachelor of science degree in accounting from Virginia Commonwealth University in Richmond, Va.

Clark and his wife, Mary Ann, have two children. He is a member of the Board of Directors of the Franklin-Southampton Area Chamber of Commerce and is Administrative Council chairman at Capron United Methodist Church.